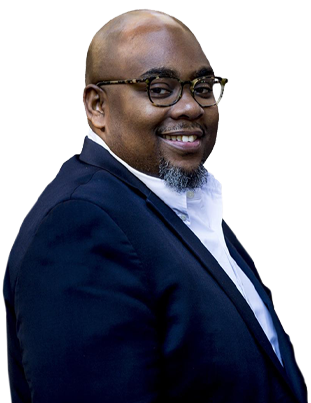 Born in Philadelphia, Pennsylvania, Rev. Hearst is the son of Brenda Hearst and the Rev. Dr. Stanley Hearst, Sr., pastor of Bethel African Methodist Episcopal Church in Moorestown, New Jersey. A graduate of Penn State University, with a Bachelor of Science Degree in Rehabilitation Services, he received his Master of Divinity Degree from Payne Theological Seminary in Wilberforce, OH, and his Doctor of Ministry degree from United Theological Seminary in Dayton, OH. Rev. Hearst also completed four units of Clinical Pastoral Education (CPE) at Albert Einstein Medical Center in Philadelphia, PA, where he served as a chaplain intern and chaplain resident.

In 2008, at the age of 25, Stanley Hearst, II, courageously responded to the Lord’s cry in Isaiah 6: “Whom shall I send? And who will go for us?” He preached his initial sermon on October 15, 2008, and was licensed by Presiding Elder Joseph Patterson. “Passionate, Powerful, and Prophetic”, he is undoubtedly a fresh and much needed voice in this present age.

Before moving to Ohio to complete seminary, Rev. Hearst was employed in the mental health and social service arenas. He was employed as a consultation and education specialist, in-home protective services caseworker and social worker with various youth agencies, including the Philadelphia public school system. Rev. Hearst also developed and implemented a Summer Youth Enrichment Program at Waters Memorial AME Church, Philadelphia, PA.

At the 196th Session of the Philadelphia Annual Conference, Rev. Hearst was elected and ordained an Itinerant Deacon in the African Methodist Episcopal Church. On May 30, 2012, he was appointed the pastor of St. Paul AME Church, Waynesboro, PA, by Bishop Richard Franklin Norris. While only there a year, St. Paul saw an increase in conversions, membership, giving, and the renovation of the parsonage that had been unoccupied for five years.

At the 197th session of the Philadelphia Annual Conference, under the leadership of Bishop Gregory G.M. Ingram, Rev. Hearst was elected and ordained an Itinerant Elder in the African Methodist Episcopal Church. On June 15, 2013, Bishop Ingram appointed Rev. Hearst pastor of Historic Jones Tabernacle AME Church, Philadelphia, PA. The pastoral tenure of Rev. Hearst is credited with the spiritual, financial, and administrative resurgence of Historic Jones Tabernacle. While he was there, numerous renovations were completed within the edifice. The Historic Jones Tabernacle family also hosted the 2014 Philadelphia Annual Conference Advent Service, and the 2015 West Main-Line District Church School Convention. New ministries were birthed in the church, including social media and web ministry and the National Prayer Line. There was also the revival of dormant ministries, including Social Action Ministry, Class Leaders Council, Women’s Ministry, and the Lay Organization, which had over 50 members by the end of Rev, Hearst’s administration. Most importantly, during his four- year tenure, many people of all ages were saved, joined the church, and were baptized into the family of God.

In 2020 Rev. Hearst was appointed to the Board of Trustees of Payne Theological Seminary by Bishop Gregory G.M. Ingram. At the 51st Quadrennial Session of the General Conference in Orlando, Florida, Rev. Hearst was elected to serve as the youth minister representative to the General Board. He is the immediate past pastor of Mt. Pisgah AME Church in Jersey City, NJ.

While serving at Jones Tabernacle, Rev. Hearst met the then Melanie Bryant, at the First District Fall Convocation. She was singing in the young adult choir, and after the worship service they connected reciting lyrics to a popular song. Some months later a friendship formed, and Rev. Hearst and Sis. Bryant worked together in ministry feeding the hungry around Thanksgiving 2014. God had more than a friendship in the plans, and on May 6, 2017, they were married at Mt. Tabor AME Church in Philadelphia, Pennsylvania. They are the proud parents of a daughter, Shia Janae Hearst, born September 11, 2020.

While he loves serving as a pastor, Rev. Hearst knows that his first ministry is to his family, and then the church. Each day he strives to live his favorite Scripture, “He has shown you, O man, what is good, and what does the LORD require of you but to do justly, to love mercy, and to walk humbly with your God (Micah 6:8)?” This Scripture has driven Rev. Hearst to passionately, consistently, and prophetically speak truth to power concerning issues of social justice, like the mass incarceration of African American Males. Rev. Dr. Stanley Hearst, II is simply a servant seeking to do the work of the Lord.

Want to make Bethel AME your home church?
We would love for you to become a member.
Contact Us Today
X